Long time post nothing... Shame on me.
Nothing more than couple of intresting links for weekend reading.
Nice post from Rob Hoelz about Perl 5 internals, worth reading (understanding of perlguts or illguts required)
And something totally different - Cloudera have nice post about Hadoop hardare planning
Автор: deniszh на 07:02 Комментариев нет:


Russian post is here.
There's good article in Linkedin engineering blog - "Play Framework: async I/O without the thread pool and callback hell". As you could guess it's about programming on Scala using Play Framework. :) - starting from event-driven vs threaded programming model, but after that it says how Scala-specific things could help avoid of event programming flaws like callback hell etc.
What if you don't know Scala language? You can master it using fun game Scalatron - you'll need to write bots which will compete in a virtual arena for energy and survival.

But if you're prefer more traditional learning - Martin Odersky himself bring second iteration of Functional Programming Principles in Scala course on coursera.org from March 25, you still have time to sign in. It's quite intresting and not very hard - it was possible even for me to finish it (although with not very great results :)
IMHO Scala is quite intresting language. I think it's somewhat similar to Perl, but not about syntax, it's about... I don't know.. impression? It's also quite brief (especially comparable to Java) and powerful. 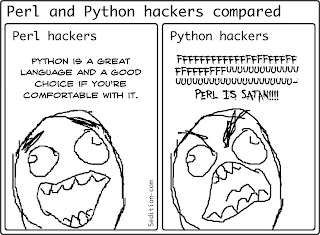 There is a new website with skill tests - http://smarterer.com/
They're proud about their scoring system and looks like it works - I have Expert grade in Perl, and just beginner for Python. :)
You can create special page to measure d**k length proud - http://smarterer.com/deniszh (and you can cowardly hide "not-so-good-test-results" on that page :D)